“There is no excuse to cut corners when it comes to the safety of workers in this industry,” said Minister Grace.

“The risks are just too high, people’s lives are at risk.”

A Workplace Health and Safety Queensland (WHSQ) spokesman said the watchdog was continuing to audit all silica stone benchtop fabricators in operation throughout Queensland as part of its Stage 3 compliance campaign that began in August.

The state’s safety blitz started as a result of inquiries from this paper, with the regulator originally saying it would audit a “sample” of the state’s 166 workplaces to ensure they were complying with the Silica Stone Benchtop Code of Practice 2019.

But after discovering widespread noncompliance during the early stages of the audit, it committed to visiting every single workplace across in the state.

As of November 23, 118 stone benchtop workplaces have been audited, with 236 enforcement actions taken because workplaces have failed to adequately protect their workers.

The Gold Coast region has the largest concentration of stone benchtop fabricators in the state, with 35 workplaces. Of those, 31 workplaces have been audited with 69 enforcement actions taken, this includes three prohibition notices.

A prohibition notice requires a workplace immediately stops an action because it poses a serious risk to the health or safety of a person from an immediate or imminent exposure to a hazard. Inspectors must follow up these notices to ensure the dangerous activity has been stopped or risk is mitigated.

“If an inspector forms a reasonable belief that a person is contravening the law, then they take appropriate action to remedy the situation,” said the WHSQ spokesman.

“Rest assured, WHSQ will act quickly and decisively to ensure workers are protected from silica exposure.

“It is encouraging that there has been a significant reduction in hazardous dry cutting as well as improvements in health monitoring levels since the last campaign.

“However, more work still needs to be done.”

“WHSQ will continue its enforcement and compliance campaign to ensure workers are protected and laws, regulations and codes of practice are adhered to” she said.

AUSTRALIA’s first dedicated website for silicosis sufferers has been launched, offering face-to-face or online support for Gold Coasters struggling with a diagnosis.

It comes as five more Queenslanders are diagnosed with the potentially fatal lung disease.

According to WorkCover health screening data of 1053 stonemasons, 228 people have been diagnosed with a work-related condition as of October 31. Of these, 184 young men have silicosis and 32 have progressive massive fibrosis (advanced silicosis).

WorkCover said it was helping them with their recovery, rehabilitation and providing compensation for loss of wages.

For their mental health, silicosis sufferers diagnosed with the terminal illness can now jump online and access confidential support through the Silicosis Support Network’s new website.

In addition to offering social workers and individual, peer or group support, the service provides vital information and resources on the disease.

It also facilitates monthly group supports and offers home visits. It does not offer medical or treatment advice, but can put members in touch with medical professionals.

Developed with funding from the Queensland Department of Health, the service is run by the Asbestos Disease Support Society. 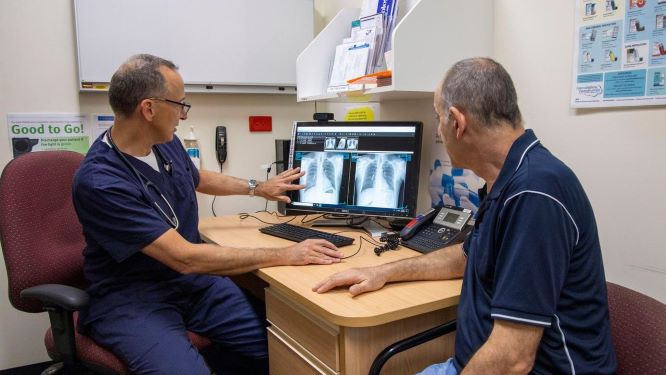 Silicosis sufferer Anthony Constantine, of Carindale, who underwent a whole lung lavage at

The Prince Charles Hospital – the procedure was performed by Professor Dan Chambers.

The Silicosis Support Network (SSN) is part of ADSS Ltd and serves to support people who have Silicosis. SSN is a not-for-profit entity that derives its income from donations and government grants. SSN does not offer medical advice but puts members in touch with medical professionals.